Fascinating Facts about the Statue of Liberty 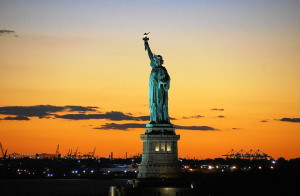 Booking a private yacht rental aboard Imagine Yacht Charters includes a fun day on the waters of the New York Harbor where you can enjoy water sports, food, drinks and sun. We offer a variety of day trip crewed yacht charters for both the adventurous and the relaxers. Almost all of our voyages include sights of iconic New York landmarks from the Colgate Clock to Ellis Island, Battery Park and, of course, the Statue of Liberty. But you don’t have to just marvel at these attractions, lean some interesting Statue of Liberty facts you probably didn’t know!

15 Fun & Interesting Facts about the Statue of Liberty

Her official name is “Liberty Enlightening the World,” but we refer to her simply as the Statue of Liberty.

The table inscription reads “JULY IV MDCCLXXVI” or July 4, 1776, the date of the United States’ independence from Great Britain and the declaration of independence was signed.

Constructed of sheets of copper, the statue turned green due to the weather.

It was strategically placed in the directional position South-East as a welcoming symbol for ships coming into the harbor.

She strongly resembles the Roman goddess Libertas, who is a representational of freedom against oppression & tyranny.

Lady Liberty was declared a national monument in 1924.

She wears a crown with 7 spikes, thought to represent the 7 continents and 7 oceans of the world.

The head of the statue was on display at the Paris World’s Fair in 1878.

To get to the top of the statue’s crown you must climb 354 stairs.

She was destroyed in several movies including Planet of the Apes, Independence Day and The Day After Tomorrow.

In 2010, a photographer captured Lady Liberty being struck by lightning. While this was the first time it was recorded, it is believed the statue is struck about 600 times per year.

Due to damage from Hurricane Sandy, it was closed for a period of time for repairs.

No one has stepped foot in the torch since 1916 when German saboteurs set off an explosion during WW1. Repairs cost roughly $100,000 at the time and that section has been closed to the public ever since.