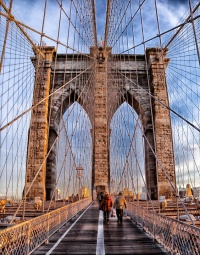 When you think of New York City several landmarks come to mind: the Statue of Liberty, Broadway, Times Square and, of course, the Brooklyn Bridge. Imagine Yacht Charters, a NYC luxury charter yacht, highlights 15 interesting Brooklyn Bridge facts. Our list includes information about its construction, fun facts and even a few urban myths.

15 Brooklyn Bridge Facts Even Native New Yorkers Might Not Know

3: Emily Roebling was the first person to make a trip across the bridge.

4: In May 1884, 21 elephants trekked across the bridge in order to showcase just how stable and safe it was for humans to cross.

5: No one knows the original color. For years there has been a debate amongst historians if the landmark was originally tan or red.

6: The Brooklyn Bridge was the first suspension bridge to use steel wire.

8: It cost $15 million for total construction & labor costs – the equivalent of $320 million today!

9: The Brooklyn Bridge was the longest suspension bridge in the world for 20 years, until the construction of the Williamsburg Bridge.

11: In 1964, it was officially designated a National Historic Landmark.

12: It is a very popular location for movies, films & sitcoms with over 160 appearances to date!

13: The bridge has been “sold” several hundred times. George C. Parker will forever be known as the greatest con-man in American history. Legend has it he “sold” the Brooklyn Bridge twice a week for close to 30 years!

15: You can take a private NYC yacht charter to explore these iconic landmarks including the Brooklyn Bridge, Statue of Liberty, Colgate Clock and more with Imagine Yacht Charters!